Comedian Erin Foley has been bitten by the acting bug 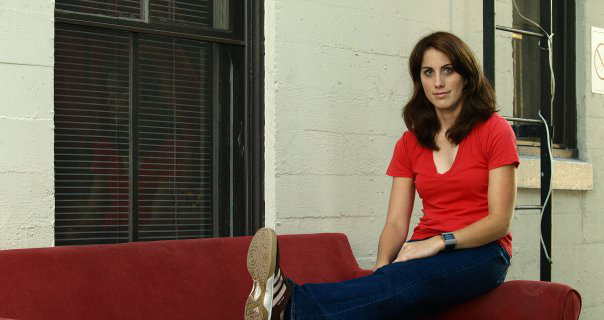 A seldom-discussed pastime of many standup comedians is sitting, as in those offstage moments they can take a seat and be alone with their thoughts. But don’t expect to find Erin Foley kicking back on a La-Z-Boy before her standup sets. It seems like she’s been living on a treadmill since entering the comedy circuit nearly a decade ago.

Foley sharpened her sarcastic wit at comedy clubs in New York City, where she started using her humor to fight homophobia and other societal ills. Then television came calling. Since her breakout role as Alison the Fact Checker in the Oscar-winning 2000 film Almost Famous, she has appeared on screens big and small, in commercials, on her own Comedy Central special and earlier this year on Conan. Recently, she relocated to Los Angeles to pursue an acting career.

I asked her about her journey to Hollywood before her upcoming trip to Madison’s Comedy Club on State, where she’ll perform Thursday, Jan. 17, through Saturday, Jan. 19.

The Daily Page: Could you briefly tell me about your road to comedy? Was it a natural fit for you starting out, or did you encounter a lot of hurdles and moments of doubt?

Foley: I started out doing improv comedy in New York City. My shows were at 6:30 p.m. at the New York Comedy Club, a small standup comedy club on the east side. After my show, I would stay and watch standup for hours. I had never seen or even heard of standup comedy before moving to NYC. I loved it instantly, quit improv and started writing jokes nonstop. From my first show to my last show, there will be hurdles and moments of self-doubt. That’s why I love wine.

Comedy and acting seem to compliment each other, but which one do you love the most?

As an actress, what do you think about this year’s Academy and Golden Globe Award nominations?

I just watched the Golden Globes. Tina Fey and Amy Poehler were fantastic. It’s amazing to see women get more and more opportunities in comedy. I’m excited for the Oscars as well, although it’s probably going to be another five-hour snooze fest. I’m really pulling for Silver Linings Playbook

What is your dream role as an actor?

I think my dream acting scenario would be to do a comedic play on Broadway. I’m obsessed with live performance.

You’ve also done commercials. What was the first commercial you ever did, and have you ever had funny experiences while filming one?

I honestly can’t remember which commercial I did first, but a lot of people have enjoyed the Philly Cream Cheese spots where I play a super-sarcastic angel. Wearing all-white, 20-pound angel wings on your back makes you question all your life choices until the check comes in the mail.

At one point in your life you considered being a teacher. What subject would you have taught?

I would have loved to have gone back to school and furthered my degree in American Studies. Basically, you’re studying American culture from every angle: religion, history, pop culture, literature, sports, etc.

I was reading Steve Martin’s autobiography, Born Standing Up, recently, and he wrote that he rarely enjoyed the moment when he was on stage performing. He was always too busy thinking about what came next. Do you enjoy yourself in the moment of performing, or is it a situation similar to Martin’s?

I should read his autobiography ASAP. He’s one of my idols. It’s really hard to enjoy yourself in the moment, something I’ve been working on since I started. The more you perform and the older and more experienced you become, the better chance you have at soaking it all in, minute to minute.

Have you ever been to Madison before?

I’ve never been to Madison before, and I couldn’t be more excited.

What is your perception of Madison and Wisconsin?

She ended her set with a new routine — complete with a mock impassioned reference to creating a “nude clown opera” — that makes the case for following your own artistic vision, no matter how weird. It’s a philosophy she’s followed with great success in her own career by steadily building the sort of audience that found its way to two sold-out shows at the Brattle Theater and was now giving her a tumultuous standing ovation. Comedian Mike Birbiglia, famed for his indie film of his monologue Sleepwalk With Me, had tweeted following another recent performance: “Saw [Maria Bamford] tonight at Caroline’s. I’ve never seen a comedian who made me want to give 25 standing ovations in one set.” That captures some of the thrill of seeing a great comedian like Maria Bamford come into her own.

In some ways, she represents the polar opposite of some of the most dispiriting trends in mass-cult comedy, as embodied by the wildly successful Chelsea Handler. Handler has an influential TV show, best-selling books and fills arenas with comedy that is pedestrian, crude, obvious, unfunny and needlessly vulgar while being beloved by millions of fans — and being despised by smart comedians who don’t need to curry her favor. (Her fans believe that all her critics are just prigs who are jealous of her beauty, wealth and fame.) Some of that industry loathing can be found in an amusing best-of podcast edition of Hollywood Babylon, co-hosted by radio host Ralph Garman and director Kevin Smith — but even Kevin Smith had to go on her show to promote a new film. At one point, Garman, when not fuming with obscenities aimed at Handler, quotes comedian Daniel Tosh as saying, “Comedy is hard. If it were easy, Chelsea Handler would be doing it.”

Bamford has never attacked Handler and presumably travels in different circles in Los Angeles, but Bamford’s growing success is a sign that there is an indeed a potentially large market for intelligent, heartfelt and thoughtful comedy.

There will be a potentially huge audience waiting for Erin Foley, once the rest of America catches up with those in women’s comedy circles who already treat her like a superstar. Foley was the featured comic who preceded Bamford, and she quickly established that she’s a first-tier comedian and actress who deserves to be seen more often in movies and on TV.

It’s not as if she’s had no major national exposure, of course: She has a 2009 Comedy Central special under her belt, had a guest slot on Curb Your Enthusiasm, appeared in Cameron Crowe’s Almost Famous, released a comedy album in 2011, and headlined in TV Guide’s series Stand-Up in Stilettos and Comedy Central’s Mash-Up. She has long been cracking up crowds at New York’s most prestigious comedy clubs before heading to Los Angeles recently to seek wider renown in TV and films. After I just discovered her acting reel, including national TV commercials, it seems to me she shows more comic flair in 30-second commercials (see her Nature Made slot) and short films than anyone in Two Broke Girls has demonstrated in two seasons.

But I had never seen her videos or her stage show before last week, and so she was a revelation. She was simply magnetic striding on stage. A tall woman in a dark shirt and blue jeans, with cobalt blue eyes and long brown hair, she had a loose-limbed goofy charm drawn from her days as an improv actor that only supplemented her fiercely intelligent, well-observed comedy. Her hilarious opening routine was on depressing book stores featuring such books as Vegan Cooking for One, a bit that hit home with this educated audience in Cambridge. But when she turned to the absurdities of right-wing politics andPorltlandia-syle cultural and political correctness, she was entering new territory that most other left-wing comics can’t match. That’s because of her comedic acting skills, and the routines she writes that keep building more laughs with each added detail along with their ramped-up intensity. She ended her set by lampooning the irrelevance of the Bible to the debate on gay marriage by reading aloud, as if she were a Congressman in a debate, from a scene from the Harry Potter series. It showed an Andy Kaufman-like sense of absurdity blended with political awareness, and it killed. She got a rousing standing ovation, and left this comedy fan wanting to see more of Erin Foley. Special note to the popular Stephanie Miller Sexy Liberal Show: add Foley in some guest opening segments.

As these video clips from an appearance at the Gotham Comedy Club show, you don’t have to be a lesbian to love Erin Foley.
Her recent Conan appearance, below, gives a brief sense of what she can do but downplays her biting political humor. But it’s striking that despite a Comedy Central special in 2009, rave reviews wherever she appears and a great album in 2011, it took until last year for her to land a major network late-night comedy slot. She doesn’t need any special pleading from me, but it’s seems likely that her reputation as a “lesbian comic” who hosts shows such as the Gays R Us improv show in Los Angeles and plays lesbian cruises — even though it’s been years since Ellen came out of the closet — seems to have somewhat limited her earlier opportunities in major TV shows and movies. Maybe it’s because some of her material openly addresses the fact that she has a girlfriend. So what? But with the universal appeal of her humor and the rapid changes in the culture at large — seen the latest polls on 81 percent support for gay marriage among young people? — there’s little doubt that we will in fact be seeing far more of Erin Foley: